A Puzzling Narrative, Parte the First…

...in which a perfectly good picture book text is utterly dismantled.
I wrote a text for a picture book. It was a text I liked, and I submitted it to an editor who had invited me to send more of my work. On this particular text, she gave me some positive feedback and rejected it, and as one does sometimes with such things, I closed the file and let it sit…for two years.
But the text began to whisper again, and because I was somewhat desperate for forward creative motion in my life, I opened up the file, tweaked it a little, and took it off to crit group. They liked it. But I wasn’t ready to send it out just yet, because the narrative had an essential—and fatal—flaw. I knew it. I just wasn't sure how to solve it. The flaw was this:


The ending did not deliver on the promise I’d set up in the beginning of the story.
It’s the kind of flaw I pick up in students’ work all the time, and here it was, grumbling at me from my computer screen.
Fast forward a month or four. I've decided it's high time I pick up a pencil and think about illustrating this text. I've felt a renewed excitement about it. But as I've storyboarded it out, the flaw has begun to shout. It's increasingly clear, as I think about the visual narrative, that this problem must be solved if the text has any chance of working. And while some problems can be solved in the visual narrative in a picture book, this one clearly has to have a textual resolution as well.
Today, I also had to face up to the fact that though there are many elements I love about the text, the glue that held them together was more than sticky and a little-bit-icky.
So here I am this afternoon. To my left, the text as it was, the bits I love underlined. 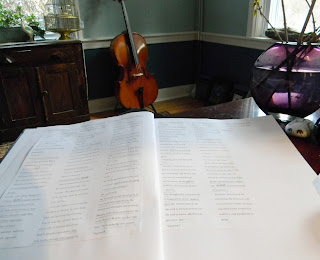 To my right, those beloved bits. Sampled and snipped. Cut up and mixed up. 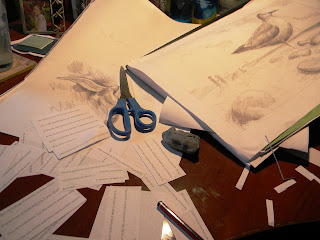 I have a feeling they’ll fall back into more or less the same place they were, but the glue between them is going to change. I needed to eliminate it completely to move forward. I’m hoping that within this puzzle is the solution to my dilemma.
To be continued…
Posted by Wordy Bird at 6:07 PM