Book Cover Illustration: My Process for "The Genie's Gift" by Chris Eboch

I have just completed a most enjoyable project: illustrating the cover for author Chris Eboch's new middle grade book, The Genie's Gift, soon to be released, and I thought I'd share my process with you.

Chris provided text from the scene she wanted illustrated and some notes about the characters. In order to get a feel for her taste, get a fuller sense of her vision, and to see if we were on the same page in terms of what we liked (we were), we looked at a variety of middle grade book covers. Pinterest is a wonderful tool for sharing ideas.

I immediately formed an image in my mind, and used Pinterest again (I like to use a “secret” board while I’m actively working on a project), compiling reference images and images whose tone spoke to me in some way.

I wanted to give the genie an imposing air, to have him hanging in the air above the protagonist, and inspiring awe in both her and the viewer. Concurrently, I did some very rough sketches and thumbnails, which I then refined until I’d come up with six possible designs: 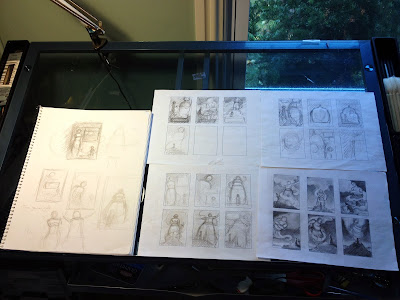 Once a design was chosen, I did the line drawing, scanned it in, and threw in some color to further convey my vision to Chris. 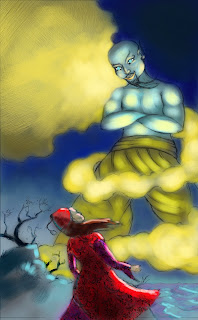 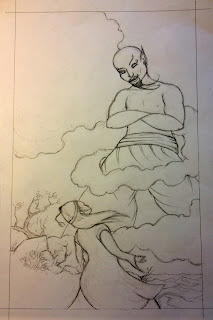 Chris had stipulated that the genie not be demonic or scary, and so we settled on this kind of face and expression: 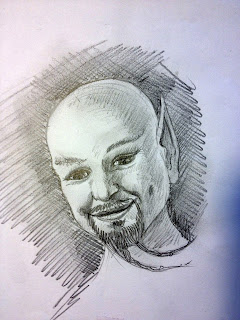 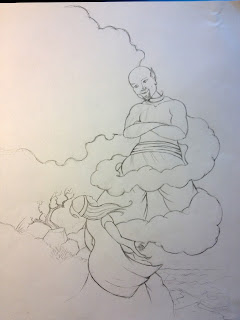 I redrew the line drawing, scanned it in, and then the painting began. I use Corel Painter, which is an extraordinary program. One of many great things about Painter is that you can combine mediums such as pencil, water color, and pastel with oil paints, which you’d have a difficult to impossible time doing with traditional media.
By this stage, Chris had decided she wanted a wraparound cover, so I extended the drawing to the left. The book designer was, of course, involved at various stages along the way as we took various aspects such as title and byline placement into consideration.

Since gold was going to be a predominant color in the painting and would provide warmth, I laid down a gold gradient on the lowest layer (which you’ll note in the image below), with the highlight behind where the genie would sit. On top of this (but under the pencil layer), I began an underpainting, throwing in the basic tones and colors. (I have found Digital Painting for the Complete Beginner by author/illustrator Carlyn Beccia invaluable as I have learned to use this program. The book is equally weighted toward those who prefer to paint using Photoshop.) 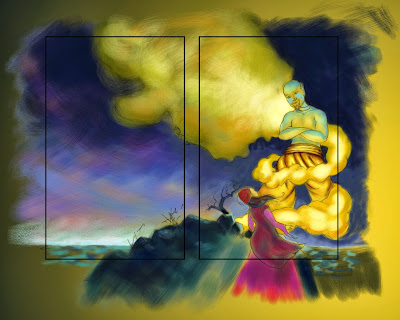 And from there, it was a process of layering paint, over many hours, until I achieved the look I wanted. I was very excited about painting his shimmering pants:

Here’s the very blue-green genie before I did warmer glazes on top. Using cool tones allowed me to give him form without losing light:

At multiple stages of the process, I sought feedback from my critique partner and my artist mother, who both provided invaluable input. If you’re serious about illustration or writing, get yourself a good, trustworthycritique partner(s) or group who won’t just say “It’s great” but will lay it on you as it is. So even when you think you might be done…

…you’re probably not, as some trusted other eyes should tell you.

Here is the image ready for cropping and text. YAY!

And here's the cover with text in place: 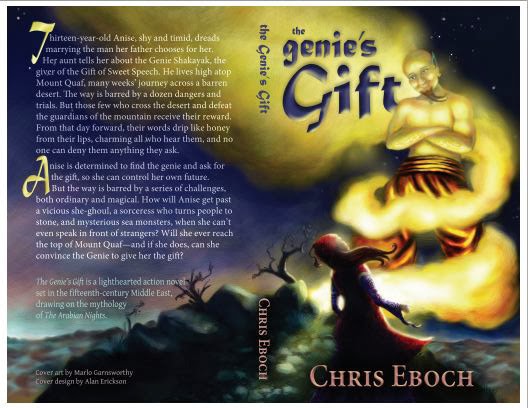 Learn more about Chris's side of the cover design process in the March/April edition of the SCBWI Bulletin. The Genie's Gift is available HERE.

And be sure to visit Chris's website and check out some of her other books. I'd also highly recommend Advanced Plotting, which I have found an excellent resource for working out narrative kinks and strengthening story-line.